Skip to content
One really cool feature in Linux distros as well as Mac is that they automatically display any plugged-in removable media on the desktop. This is a rather handy feature as it saves you the trouble of opening up (My)Computer . 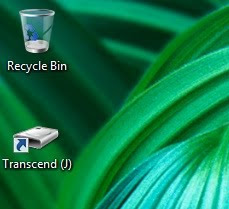 Desktop Media is a freeware which brings this feature to Windows. It works with all sorts of removable media including CD/DVD drives, USB Drives and network drives. Additionally it gives you the option of adding shortcuts to Fixed Drives (hard disc partitions) and even Ram Discs on your desktop.

For removable media such as CD/DVD drives, the shortcut will be displayed on the desktop only if a disc is present.

Desktop Media also provides a couple of other handy features including the ability to remember the icon positions, ignore specified drive letters and create Symbollic Links instead of Shortcuts. It effortlessly integrates with your Windows installation and even works with Icon Packs. This is definitely going to be appreciated by those who like to have a pretty looking desktop.

Desktop Media is a tiny download (354 KB) and has an extremely small memory footprint(less than 4 MB). I love it because it performs a specific task and performs it well.
[ Download Desktop Media ]