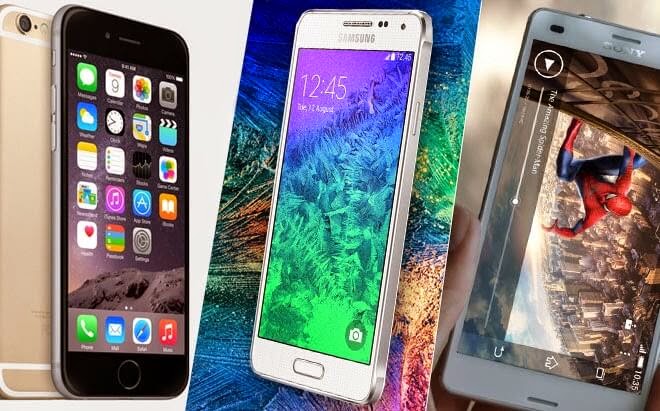 After a fair amount of time spent bashing Android smartphones for their unwieldy size by Apple fans, the Cupertino company has submitted to the demands of the public and released a phablet of its own. The 5.5-inch iPhone 6 Plus shares a majority of the specs as the iPhone 6, but has some tricks of its own to set it apart.

Of course, the iPhone 6 Plus is going head to head with the latest version of the phablet that started it all, the tried and true Samsung Galaxy Note series, along with many other phablets. Below is a chart showing how the iPhone 6 Plus compares to some new and some not-so-new Android phablets.
For a comparison of the smaller iPhone 6 model, head over to this article.

Apple’s phablet holds its own

iPhone Plus ships with a large, 5.5-inch display, firmly solidifying its presence in the phablet market, and there’s little doubt it’ll sell like hotcakes. It may lack the stylus of the Galaxy Note series, but that’s not terribly surprising, as not everyone really cares about that type of input, and Apple has shown little interest in pursuing styluses even on the iPad.
Of course, the iPhone 6 Plus ships with a Retina display, which is just a fancy way for Apple to create it’s own display marketing, and incidentally, get away with not having an iPhone with an HD display: a trend that started in 2011 for Android phones. Rejoice, then, as the larger iPhone 6 Plus has a 1080p Full HD display!
Of course, pixel density is what really counts in smartphone and tablet screens, and Apple has done a decent job in this department, pushing high-PPI displays before Android..
With a pixel density of 401 PPI, the iPhone 6 Plus easily bests the likes of the mid-range G3 Stylus and the almost year-old G Flex, it can’t compete with the 2K displays found on high-end phablets, like the new Note 4.

The Apple A8 processor is a beast (we think)
Featuring the new A8 processor and M8 co-processor, the iPhone 6’s bigger brother is just as powerful the 4.7-inch model. The Plus is going to be a snappy piece of kit out of the box, but exact details are still on the sketchy side.
What Apple discloses about the A8 processor notwithstanding, it’ll take time time to find out exactly what’s under the hood of the new chip, including how much RAM the A8 comes with. This also makes it hard to compare the A8 to existing processors on the market that ship in Android phones. By and far the hottest of them all would be the Qualcomm Snapdragon 805, which is found on the new Galaxy Note 4.
Bottom of Form
The A7 was a blazing fast processor, and Apple claims the A8 is has a 25% faster CPU and 50% faster GPU, so we expect it to hold its own against Android phones through the coming year.
We should note that Apple doesn’t give battery specs, but claims that the iPhone 6 Plus will last two hours more than the 4.7-inch version when browsing the web, and has nearly twice the talk time and audio playback time. There’s definitely a much bigger battery in there, but the larger screen eats away at it when activities call for screen-on time.

Enhanced iSight camera
As a follow-up to the last generation iSight camera, the iPhone Plus has an updated sensor for the 8 megapixel shooter. While a vast majority of Android smartphone surpassed the use of 8 megapixel cameras a few years ago, Apple hasn’t seen the need to, and for good reason. It’s still a solid camera that takes great photos, no matter how you spin it.
The camera features are identical between the 6 and the 6 Plus, including super slo-mo 240fps video recording, enhanced panorama, and phase detection autofocus.
One of the few differences between the iPhone 6 and iPhone 6 Plus is that the latter comes with optical image stabilization (OIS). A feature that’s still isn’t found in too many Android smartphones today, the OIS on the iPhone 6 Plus should have a lot of people excited.
The FaceTime camera has seen very few updates. It’s still the 1.2 megapixel shooter found on the previous iPhone, but it now has a slightly wider aperture (f/2.2 instead of f/2.4), Burst photo mode, and HDR for videos.

NFC finally makes an appearance with Apple Pay
A feature that Apple’s really been lagging behind implementing NFC into its smartphones, and it, along with Apple Pay has been introduced with the new iPhone lineup. While Android smartphones have been shipping with these NFC chips for years, the payment system backing them, Google Wallet, never got off the ground.
Now that Apple’s in the game, there’s a good chance that Tap to Pay will actually become a “thing” now. With Apple’s marketing prowess, mobile payments could take off in a way that it’ll even benefit its competition in the process.
More expensive than the standard model
Unsurprisingly, the iPhone Plus will cost more than the 4.7-inch model. This is the case for a handful of Android phablets, and Apple’s premium hardware and design wil run you $300 for a 16GB version on a new contract. You’ll just need to think about how important an extra 0.8-inches of screen real estate is to you.